Distillation is the most common form of separation technology used in petroleum refineries, petrochemical and chemical plants, natural gas processing and cryogenic air separation plants. Fractional distillation is also a crucial step in the processing of “not-from-concentrate” orange juice. In most cases, the distillation is operated at a continuous steady state. New feed is always being added to the distillation column and products are always being removed. Unless the process is disturbed due to changes in feed, heat, ambient temperature, or condensing, the amount of feed being added and the amount of product being removed are normally equal. This is known as continuous, steady-state fractional distillation.
Industrial distillation is typically performed in large, vertical cylindrical columns known as “distillation or fractionation towers” or “distillation columns” with diameters ranging from about 65 centimeters to 6 meters and heights ranging from about 6 meters to 60 meters or more. The distillation towers have liquid outlets at intervals up the column which allow for the withdrawal of different fractions or products having different boiling points or boiling ranges. By increasing the temperature of the product inside the columns, the different hydrocarbons are separated. The “lightest” products (those with the lowest boiling point) exit from the top of the columns and the “heaviest” products (those with the highest boiling point) exit from the bottom of the column.
For example, fractional distillation is used in oil refineries to separate crude oil into useful substances (or fractions) having different hydrocarbons of different boiling points. The crude oil fractions with higher boiling points: 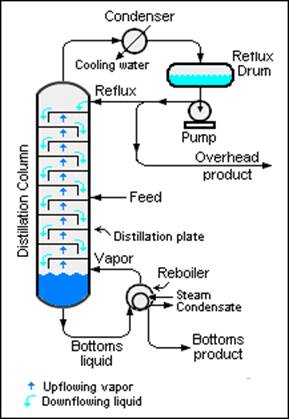 Large-scale industrial towers use reflux to achieve a more complete separation of products. Reflux refers to the portion of the condensed overhead liquid product from a distillation or fractionation tower that is returned to the upper part of the tower as shown in the schematic diagram of a typical, large-scale industrial distillation tower. Inside the tower, the reflux liquid flowing downwards provides the cooling needed to condense the vapors flowing upwards, thereby increasing the effectiveness of the distillation tower. The more reflux is provided for a given number of theoretical plates, the better the tower’s separation of lower boiling materials from higher boiling materials. Alternatively, the more reflux provided for a given desired separation, the fewer theoretical plates are required.

Crude oil is separated into fractions by fractional distillation. The fractions at the top of the fractionating column have lower boiling points than the fractions at the bottom. The heavy bottom fractions are often cracked into lighter, more useful products. All of the fractions are processed further in other refining units.
Fractional distillation is also used in air separation, producing liquid oxygen, liquid nitrogen, and highly concentrated argon. Distillation of chlorosilanes also enable the production of high-purity silicon for use as a semiconductor.
In industrial uses, sometimes a packing material is used in the column instead of trays, especially when low pressure drops across the column are required, as when operating under vacuum. This packing material can either be random dumped packing (1-3″ wide) such as Raschig rings or structured sheet metal. Typical manufacturers are Koch, Sulzer and other companies. Liquids tend to wet the surface of the packing and the vapors pass across this wetted surface, where mass transfer takes place. Unlike conventional tray distillation in which every tray represents a separate point of vapor liquid equilibrium the vapor liquid equilibrium curve in a packed column is continuous. However, when modeling packed columns it is useful to compute a number of “theoretical plates” to denote the separation efficiency of the packed column with respect to more traditional trays. Differently shaped packings have different surface areas and void space between packings. Both of these factors affect packing performance.

Moreover, the efficiencies of the vapor-liquid contact devices (referred to as plates or trays) used in distillation columns, as seen in Figure 3, are typically lower than that of a theoretical 100% efficient equilibrium stage. Hence, a distillation column needs more plates than the number of theoretical vapor-liquid equilibrium stages.
An indication of numbers: the separation of two compounds with relative volatility of 1.1 requires a minimum of 130 theoretical plates with a minimum reflux ratio of 20. With a relative volatility of 4, the required number of theoretical plates decreased to 9 with a reflux ratio of 0.66. In another source, a boiling point difference of 30 °C requires 12 theoretical plates and, for a difference of 3 °C, the number of plates increased to 1000.
The reflux ratio is the ratio of the amount of moles returned as refluxed liquid to the fractionating column and the amount of moles of final product, both per unit time.

Petroleum crude oil is a complex mixture of hundreds of different hydrocarbon compounds generally having from 3 to 60 carbon atoms per molecule, although there may be small amounts of hydrocarbons outside that range. The refining of crude oil begins with distilling the incoming crude oil in a so-called atmospheric distillation column operating at pressures slightly above atmospheric pressure.
In distilling the crude oil, it is important not to subject the crude oil to temperatures above 370 to 380 °C because the high molecular weight components in the crude oil will undergo thermal cracking and form petroleum coke at temperatures above that. Formation of coke would result in plugging the tubes in the furnace that heats the feed stream to the crude oil distillation column. Plugging would also occur in the piping from the furnace to the distillation column as well as in the column itself.
The constraint imposed by limiting the column inlet crude oil to a temperature of more than 370 to 380 °C yields a residual oil from the bottom of the atmospheric distillation column consisting entirely of hydrocarbons that boil above 370 to 380 °C.
To further distill the residual oil from the atmospheric distillation column, the distillation must be performed at absolute pressures as low as 10 to 40 mmHg (also referred to as Torr) so as to limit the operating temperature to less than 370 to 380 °C.
The 10 to 40 mmHg absolute pressure in a vacuum distillation column increases the volume of vapor formed per volume of liquid distilled. The result is that such columns have very large diameters.
Distillation columns such those in Images 1 and 2, may have diameters of 15 meters or more, heights ranging up to about 50 meters, and feed rates ranging up to about 25,400 cubic meters per day (160,000 barrels per day).
The vacuum distillation column internals must provide good vapor-liquid contacting while, at the same time, maintaining a very low pressure increase from the top of the column top to the bottom. Therefore, the vacuum column uses distillation trays only where withdrawing products from the side of the column (referred to as side draws). Most of the column uses packing material for the vapor-liquid contacting because such packing has a lower pressure drop than distillation trays. This packing material can be either structured sheet metal or randomly dumped packing such as Raschig rings.
The absolute pressure of 10 to 40 mmHg in the vacuum column is most often achieved by using multiple stages of steam jet ejectors.
Many industries, other than the petroleum refining industry, use vacuum distillation on a much a smaller scale.

Molecular distillation is vacuum distillation below the pressure of 0.01 torr. 0.01 torr is one order of magnitude above high vacuum, where fluids are in the free molecular flow regime, i.e. the mean free path of molecules is comparable to the size of the equipment. The gaseous phase no longer exerts significant pressure on the substance to be evaporated, and consequently, rate of evaporation no longer depends on pressure. That is, because the continuum assumptions of fluid dynamics no longer apply, mass transport is governed by molecular dynamics rather than fluid dynamics. Thus, a short path between the hot surface and the cold surface is necessary, typically by suspending a hot plate covered with a film of feed next to a cold plate with a line of sight in between. Molecular distillation is used industrially for purification of oils.